Scooter and Tilly were thrilled a couple of weeks ago when they found
a Badminton Birdie in the Summer Toy Mess on our back porch.
They love playing with their Dad when he gets home from work.
He loves it too.
We were at a friend's house for dinner,
when they excitedly informed Daddy of the wonderful news:
"We can play Badminton again!"
Snorkie thought for a few seconds and said...
BADminton....NO....
GOOD-minton!
Gotta love a three year old with a well developed moral code!
Posted by Elizabeth at 10:40 AM 14 comments:

Snorkie McTavish is a very smart boy.
He walked at 9 months.
Climbed stairs by 11 months (yes it was scary).
He is ALL BOY!
At 18 months, he could follow three step directions.
Loves to dust, sweep, dry dishes, sort sliverware, load the dishwasher...
He just didn't like to talk very much.
At one year, he could open his father's tool box and would stand there and
grunt...
just like Tim Allen (wish we had that on video).
No Words.
As time went on, he learned a few words and a few "signs".
With two big sisters to translate, (and wait on him hand and foot),
he made himself understood.
Then he turned three.

I can't get him to shut his mouth!
He chatters ALL THE TIME!
(I believe God gave me that silent second year
so that I could get school work done with the girls...
He would have driven me crazy last year.)
His vocabulary is growing exponentially.
He repeats everything he hears from me, daddy, sisters, movies....
He tended to drop his initial consonants...still does sometimes...
so juice is 'uice, hood becomes 'ood.
Just a little Cockney English coming out...

Last week, at out last Homeschool Co-op meeting for the year,
Snorkie approached a two year old "friend".
He said, "Hi!"
Friend replied, "I!"
Snorkie gets all instructive and corrects his friend,
"Not 'I', it's Hi!"

What a smartie-pants...
"Friends" Mom & I chuckled all afternoon. 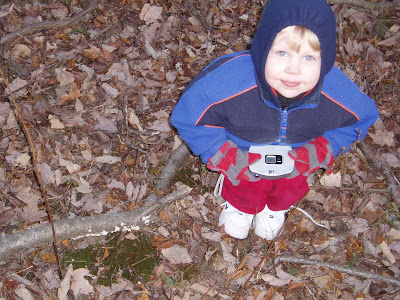 (Snorkie in an 'ood with an 'amera on a nature 'ike with Daddy)
Posted by Elizabeth at 10:05 AM 6 comments: