YIKES!
A Funny thing happened the other day...
My Darling Husband was doing a few things before work
and the computer screen suddenly informed him:
Hard Disk Failure Iminent...
Back up all data!
So being the guy he is, he dropped any recent photos to
our external drive and turned the computer over to Scooter.
She played some games, then I did some "cruising".
Later, I sent a cute little not to DH before a thunderstorm arrived.
I closed with; "Signing off an shutting down before the lightening strikes!"
The darn computer never came back on!
It kept saying that there was no Hard disk in the machine.
Now we are using the "old grey Dell" and trying to
figure out how to get the HP up and running again.
Amazingly, a girl we know from Church, and a
three year old boythat she babysits
(who we also know from our parish),
were Actually Struck by Lightening in that storm.
She was running to the car from the swim club...
trying to time it to be running between strikes,
when a tree right next to them was struck and it
travelled into their bodies (she was carrying the boy).
She was knocked out, and they were both burned where they
came into contact with her silver necklace,
but both are fine and home.
The doctor's said that the necklace may have save them,
because the lightening had an "escape route".
Praise God!
One of the Blessings of a comuterless home...
has been an excess of time for other endeavors...
I finished reading Oliver Twist and started
David Copperfield.
The kids and I cleaned and reorganized
the play space in the basement,
we dusted and vacuumed the entire house
and cleaned the bathrooms...
Oh, and I attacked an ironing pile so large that the girls
have grown out of things that were on the bottom!
(SINCE WEDNESDAY!)
I also had time to crochet hats for Scooter and Tilly
like the one worn by "Kit Kitteridge"...Snorkie wants one too,
but I insist it not be pink.
I promise that I have about five posts
travelling around my head...
with accompanying Photographs...
NOW, I just have to take the time to commit them to the Blog!
It is going to take me some time to check in with everyone.
Hope to hear from you all soon!
Posted by Elizabeth at 7:02 PM 12 comments:

Well.
Upon further examination...
Thanks to Seeker Man...
It seems that the video that I linked yesterday:
was a joke.
It has NOT been replicated
by "normal" people...
I guess you could still try...

It may have been done using a heated table.
Anyway,
it is good to know that those of you
using cell phones on a daily basis,
are not "Micro-popping" your Brains!
At least, we don't THINK so.

I still think the video was funny.
Photo Credit: Google Images
Posted by Elizabeth at 9:33 AM 13 comments:

I knew there was a reason that I didn't have a cell phone.
This video is very enlightening...
Sorry I couln't seem to load it directly.
Click on the link, though, it is worth it !!!


http://www.dailymotion.com/video/x5odhh_pop-corn-telephone-portable-mi
Have a wonderful day, and stay off the Cell Phone!
Posted by Elizabeth at 9:44 AM 4 comments:

this is pretty fun & funny though.

I think I would rather have been Eleanor Dashwood!
Sorry this post went up twice today under two different dates
I am SUCH a Blog novice... :( 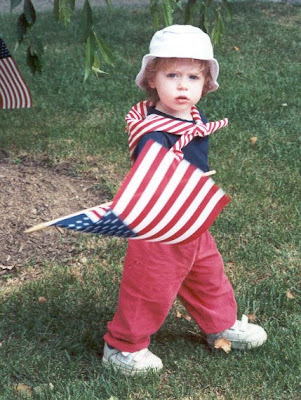 Scooter showing her Patriotic Pride
July 4, 2001 !
She actually made the local paper...
Attending a John Phillip Sousa concert with her dad.

Hope everyone has a lovely Holiday. 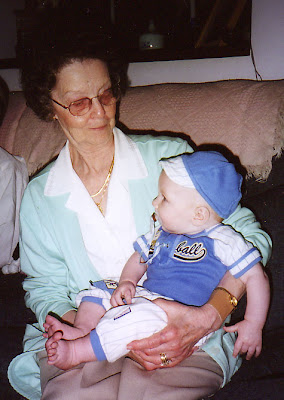 This is to my Aunt Dorothy ...

She passed away several years ago

and I miss her very much,

as do my children.

Aunt Dot's Birthday was July 2nd and I was

thinking about her all day yesterday.

She was such a lady...a Perfect Lady, always.

In the eighties, a book was published called:

but really, she fit every description of

a "real woman" in that book.

Aunt Dot didn't really like having her picture taken.

Of the few that I have, this is one of my favorites.

It is also one of the last.

Aunt Dot taught me many things: to use a table cloth and cloth napkins just to

make an ordinary lunch special, to send a silly card just for the fun of it,

to write Thank You notes (I mess up on this one all the time).

Aunt Dot always called me Elizabeth, even when my own

in case you didn't notice, I "go by" Elizabeth !

Aunt Dot and her wonderful husband Uncle Bob were

married for more than 50 years when he passed away leaving

her dreadfully sad. They were loving, constant, affectionate,

playful, kind, and a fabulous example to me of married life and love.

Thank You so much Aunt Dot for being such an Amazing Aunt and Friend.