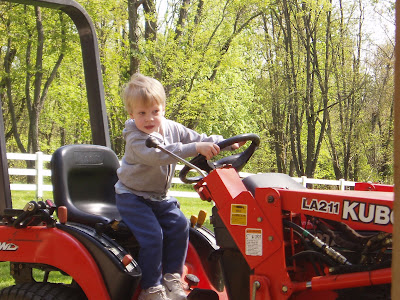 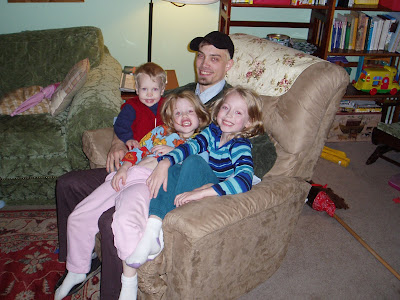 This Photo of Seeker Man, Scooter, Tilly & Snorkie
was taken on Thanksgiving Day 2006.
I love to see the way the little ones
have so much love and enthusiasm for
their big brother.
They have all been very excited about the
prospect of a new baby brother or sister.
Unfortunately,
that won't be as soon as we had hoped.
Our new baby was not meant to join us
here in this life,
we look forward to meeting her someday...
along with our other baby girl that we
lost to miscarriage about six years ago.
I am doing alright physically...
emotionally is a little tough.
But I look up at those smiling faces
in that photograph at the top of the post,
and just CAN'T feel sorry for myself.
God's Plan ALWAYS trumps My Plan,
and He has been SO Gracious to me that I can
only hand myself over to Him to do His Will.
The kids are doing OK, but we are all sad.
We look forward with the hope that
we will go on to have another baby
(or babies?)
if God wishes us do do so.
Pray for Us, Please.
Posted by Elizabeth at 4:08 PM 10 comments: 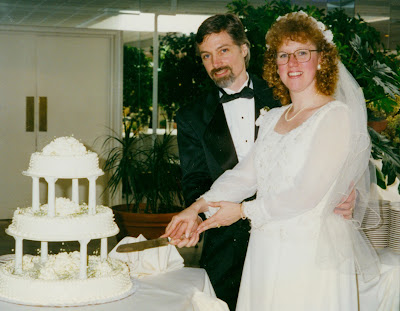 The day my dreams came true!
Yes, Lovey and I were married on
Columbus Day...
and it has truely been a
Voyage of Discovery!

when I was teaching a summer art program

that his son was attending.

He was the first one there and the last to leave.

It took us about an hour and a half to finally

leave that Friday when the class ended...

He DID ask for my number!!!

I was on cloud nine.

We went out to dinner shortly thereafter...

(The Chinese Place we went to is Still our

we go there every New Years Eve)...

I met his family in early November,

He met mine the next week at an early

He proposed on Thanksgiving Weekend...

Got down on one knee and everything!

I knew he was the man for me

because we spent so much time

talking about our Faith...

God has Always been at the Center

He is sweet, kind, helpful, romantic...

AND a Great Daddy...

It doesn't get any better than that.

Four years after we were married,

He is dedicated and strong...

and he is my

Knight (of Columbus) in Shining Armor! 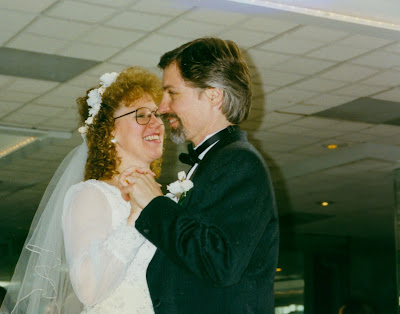 I smiled so much that day...that when I woke up in the morning

my cheeks and neck were sore!...Can you tell???

But I love him more today than I did

the day we were married...

and I didn't realize back then

That it was even Possible! 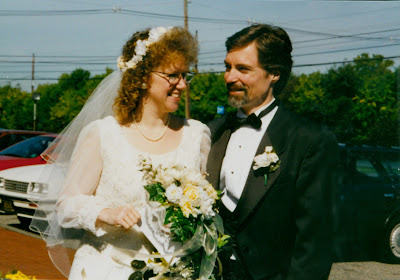 because we were walking in the

We handed out Hundreds of Rosary Beads

and accompanied a beautiful statue of

We've been home for almost a week
from our first REAL family vacation in five years,
And I'm just getting around to posting about it!
Friday, September 19th we loaded up and
headed south to
Chincoteague Virginia.
Lovey works for an Architechtural Engineering firm
that designed the Education Center on the
Assateague Island National Wildlife Refuge.
He actually did the fire alarm, security and
power distribtion work,
so we
Oooh'd and Ahhh'd
over all the cool stuff
that was mounted on the walls...
that NO ONE else ever notices...
UNLESS there is an Emergency, of course.
The Education Center is designed with
ALL GREEN TECHNOLOGY,
so it is pretty cool.
The displays were awesome, too.
Very Interactive.
I liked the one where they told us how important
Tidal Areas are both for
Providing Shelfish,
and also cleaning impurities out of the water
by being
FILTERED THROUGH THE SHELLFISH!!!
Not sure if the meant people to notice that little problem.
On the Island:
we saw the "Wild Ponies" of Assateague,
drove on the beach, watched the wild surf,
learned about sea creatures on display...
those that were alive and not so much,
hiked out to the "Pony Viewing Area",
saw special boxes built as "squirrel house" for
the endangered squirrels that live on the island,
and took lots of photos of the birds of the island...
none of which I can access right now : (
We also took a ride up to the beach after dinner
and allowed the children to get out and see
How Many STARS you can see on a clear night
with NO light pollution.
Saturday, we noticed that our hotel had a cute pony
in the "back yard".
Snorkie kept showing Daddy the "Wild Pony"
...He just didn't get it!
(we got it on tape though!)
We hiked to the Light House,
drove back to the beach,
let the girls have a pony ride on ponies
that were"veterans" of the yearly
"Pony Swim"
(I'm bad at linking...but look it up, it's worth it).
We packed up and headed FURTHER SOUTH
to Myrtle Beach, South Carolina.
Wonderful friends of ours have a condo down there,
and they let us "borrow" it for a week!
We "hung out", went to the Ripley's Aquarium,
"Mini Golfed" with Giant Dinosaurs,
Played at the beach for two days...
collecting shells and digging big holes,
Watched movies, played "Clue"
and discovered that Snorkie LOVES to
"draw numbers" for BINGO using the "tumbler".
He even likes to match up the numbers
with the board used to
keep track of the numbers already called!
We also attended:
Dolly Parton's
DIXIE STAMPEDE!!!
It was really silly and really fun and we had
food left over for DAYS
We came home again in one straight shot on
Friday the 26th...getting home around 9:30pm.
WHEW!!!!!
Luckily, there is a washer & dryer in the condo,
so I didn't have to come home with
suitcases filled with dirty clothes!
We had a Grand time,
and I am SO glad to be back in my
OWN BED!!!
Posted by Elizabeth at 5:19 PM 10 comments: